In a hotel in Suffolk, VA. Dana had originally thought Suffolk was in North Carolina, but he was wrong. Bummer. Well, at least it’s a nice hotel, regardless of what state it’s in.

Today was an exercise in frustration. We started with a lovely B at the B&B. This is Barney Fife – his job at the B&B is to eat the chocolates off of the guests’ pillows.

Our first 4 miles were to the Jamestown Ferry. On the way, we passed the story of Pocahontas, which was actually worth backtracking for: 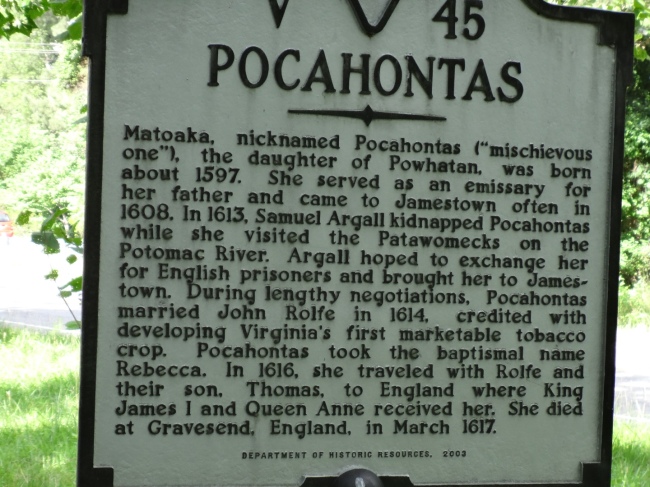 And the history of the road we had just ridden on:

Here’s one for our German friends: 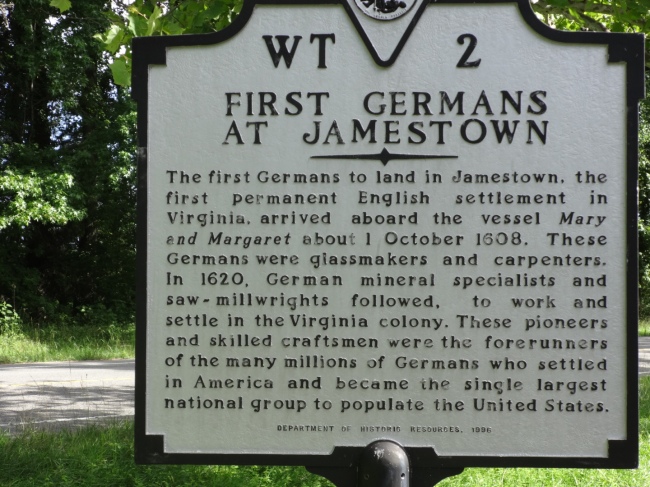 And one for our Polish friends: 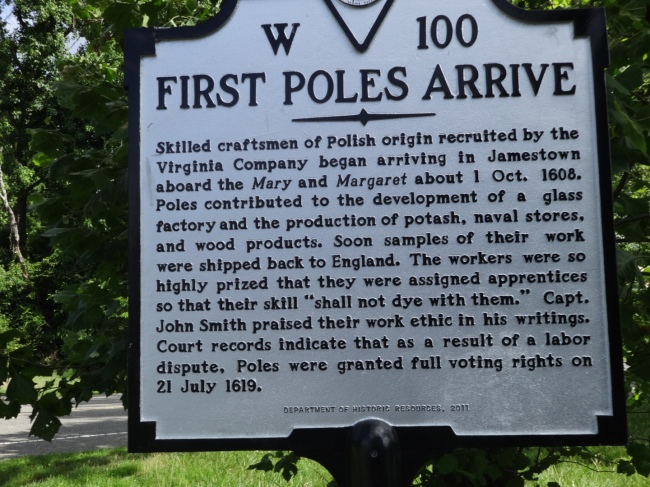 The ferry ride was very pleasant. There were 10 cars on the ferry, about 100 Bike Virginia cyclists, and us. Again, the Bike Virginia folks were very friendly, and interested in our adventure. One of them took this picture of us. 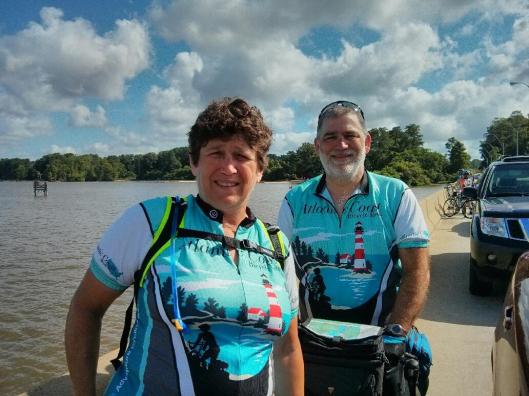 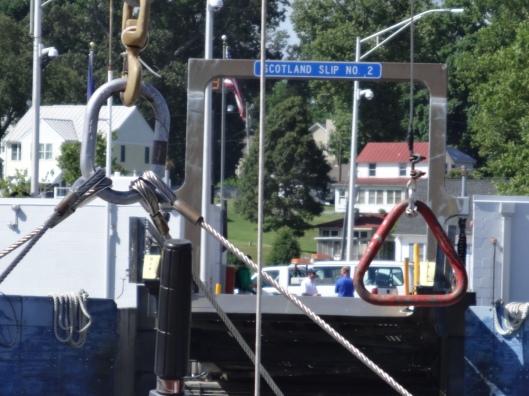 We rode with the group until the town of Bacon’s Castle,

where they turned left and we went straight. There is a store in Bacon’s Castle, where we had ice cream.

The problem with going straight out of Bacon’s Castle was that we were supposed to turn right. Dana figured that out about 5 miles too late, when we crossed the county line into Isle of Wight county, and he muttered “Shit! We’re not supposed to be here yet.”

Meanwhile, somewhere between Scotland and Bacon’s Castle, my bike computer died. A note about map math: There are two distances we need to monitor on any given ride: miles for the day, and miles on the current map. But every time we go off route the map miles get messed up. And today, when my computer died, we lost track of miles for the day. And we are constantly doing math, adding or subtracting offsets to figure out where we are, where we need to turn, etc. Today we were just confused. Lost and confused. How pathetic is that?

So we stood on the side of the road in the sun, trying to find alternate routes through Google Maps, but it’s hard to see the screen in the sun, so we rode up to the Citgo station and sat on folding chairs in the back of the store. The folks there told us to just stay on rte. 10 into Suffolk, so we decided to do that.

Route 10 was fine for quite a while, except that they were repaving part of the road, and we sort of had to race a semi through the construction area. Then I had tar and rocks stuck to my rear tire for another few miles. Dana suggested reaching my hand behind me, grabbing the rear wheel, and cleaning it while I rode.

He really doesn’t understand me very well, does he?

We stopped for lunch in Smithfield, Va for lunch. We probaly should have ridden into the Historic Downtown, but we were too tired, so we sat on the grass in the 7-Eleven parking lot. Then we tried to get back on rte. 10, but it turned into a highway, so we backtracked and found a different route to Suffolk.

Note: I’ve regretted bypassing Smithfield all afternoon, as I figured they would have some good ham restaurants there. But I just looked it up on Google, and they don’t have a House of Ham, or anything like that, so I guess I’m over my regret.

The rest of the ride was relatively pleasant and interesting. We watched wheat being harvested:

And we crossed the Prince River, with cypress trees growing right out of the water: 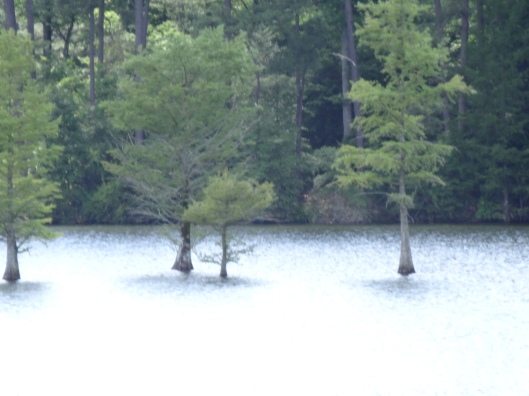 About 5 miles out of Suffolk, we stopped at a roadside fruit stand and shared a watermelon while sitting on the grass watching traffic. 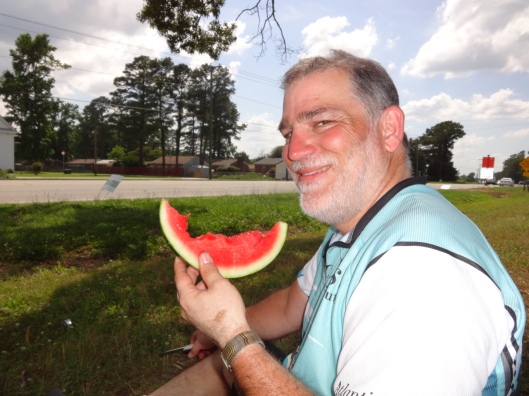 The watermelon was delicious. While I ate my watermelon, I took a picture of the socks they gave me yesterday at Cycles by Ed.

Speaking of Ed… Dana is thrilled. Since Ed fixed his derailleur, it hasn’t skipped once. He previously brought it to 3 different mechanics, and none of them checked the alignment of the derailleur hanger. Ed had a special tool for checking and straightening it, it’s the first thing he tried, and now it seems to be fixed. Dana is very excited.

The ride into Suffolk was nice, and we stopped at a Rite Aid to buy a battery for my computer. Then, all of a sudden, the traffic got horrible and dangerous, so Dana said “Pull over. I don’t know where we are, and I’m nervous.” So I pulled over and miraculously ended up the the parking lot of our hotel. It was the highlight of my day.

We have decided on a rest day tomorrow. This is a nice hotel, and I for one need a break. My butt is sore – even with the Bark-O-Lounger – and the constant fidgeting is messing up my knees. Dana’s butt is sore too, and his back keeps spasming. So tomorrow we will sleep in and rest our sore butts. Then on Thursday we will ride 50 miles to Elizabeth City, after which we will head to Kitty Hawk and the Outer Banks.