No, we didn’t walk all the way from Windor Locks to Canaan, but that title just sounds good. Maybe biblical or something, right?

Sitting in Sweet Pea’s in Riverton, CT. A cute little antiques/restaurant/ice cream place on the Farmington River. Our butts and our backs are killing us.

Today, according to the ACA maps, is our day from hell. Dana has been muttering about it, and in the course of psyching himself up, he has been freaking me out. Showing me maps with contour lines, and shadings, and oqther things that scream “you are going to climb some big f—ing hills!” Another reason to hate contour lines.

So this morning I locked myself in the bathroom, totally dreading the day. I had a strange deja vu, back to my first day of kindergarten – a certain feeling deep in my gut that says “I don’t want to.  Please don’t make me.”

The first 10 miles today were wonderful – rolling if not somewhat downhill. Our first big hill started just west of Granby, but it wasn’t all that horrible. We walked some, but there were flat sections, and there was a nice wide shoulder. After that was another 10 miles of rolling, in the middle of which I realized that I had left my watch at the hotel in Windsor Locks. So we stopped at a hardware store and sat in lawn chairs they had on display and called the hotel. After a few phone calls back and forth, they found my watch and promised to mail it home. I still can’t deal with this head button thing, though. It’s proving quite challenging, even in the hardware store parking lot.

As we were riding up a long hill, I saw a sign for Barkhampton and said “Hey, that’s where we’re going” and Dana basically said “No, silly female, we’re looking for Rte. 219”. And then I looked at the sign on the road to Barkhampton and sure enough it was 219. So today he only gets an A- for navigation.

On the way to Barkhampton we passed the most amazing scenery – the Saville Dam. It’s the kind of place they show in brochures, with people bike touring past them, saying “Come bike touring! I’s always this pretty!” 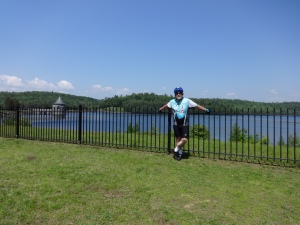 We crossed the Farmington River in Barkhampton and stopped into the town hall to fill our water bottles. They were very nice about it, and outside we met a guy who really knows Key West, so he gave us some great recommendations for places to eat and drink if/when we get there.

Continued a few miles to the restaurant on the river, had lunch, and braced ourselves for the hill from hell. We had already done 22 hilly miles, and the prospect of 22 hillier miles didn’t seem appealing. It reminded Dana of an old joke… A little boy is going to start kindergarten and his parents keep telling him how much fun it will be, pumping him up, hoping he will like school. He comes home from the first day completely happy, says he loved it. The next day when his mom tells him it’s time for school he breaks down crying. “What’s wrong?”, asks his mom. “I thought you liked school.” And the little boy replies “Yes, but I didn’t think I would have to do it again!”

The hill did not disappoint,  I’d say we walked close to 5 miles, and it was so steep that even walking was a challenge. Not to mention that at walking speed, the bugs find you. They got into our helmets and our glasses and our gloves. At one point I could hear Dana’s helmet bugs buzzing into the headset. It was awesome. The fun ended in Norfolk, where we stopped to call a B&B in Canaan. 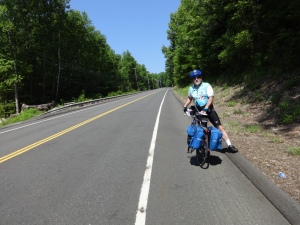 Note to self: Buy bug spray.

So we checked into the B&B, which is a mile from town, and the proprietors took pity on us and offered us their car for the evening. We are now at the Stateline Pizza restaurant. I am having a beer, but only one. That’s my rule for the rest of this ride. One beer, because Dana was showing me the big boy biking blog online, and lots of the questions deal with weight loss.

Q: How much weight do you lose bike touring for 2000 miles?

As we’re sitting here, it started pouring. Thunder, lightening, flash floods, the whole thing. We are really hoping this doesn’t continue into tomorrow. We don’t mind biking in the rain, but we have our limits. And as much as Dana says we’re meandering, we really can’t afford to lose an entire day in Canaan, CT.

OK, so we just sat at the bar for a while and started talking to Debra, and the conversation got going, and I had 2 beers. Well, a beer and a half. Sigh. But I will forgive myself, because I think we just finished the hardest day of this entire 2400 trek.