We left  our house this morning right on schedule, just before 9. Our last minute freak out was that we couldn’t find a key to bring with us, so we just locked ourselves out and hit the road. Here is our first town line crossing. Don’t worry, we won’t do every town. But we will take pictures of state line crossings. 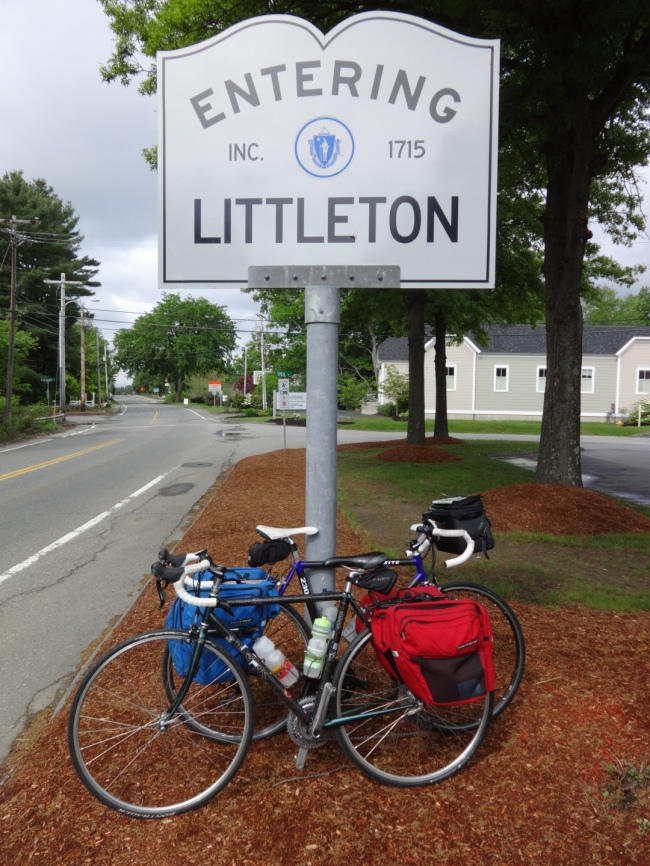 We have met a few people today who saw the panniers and asked where we are going, but when we tell them we’re going to Key West, it just feels lame.

The first thing Dana realized today is that our average speed would be higher if he had bifocal sunglasses so he could read the map without stopping and changing glasses constantly. And the reading glasses over the sunglasses thing isn’t really working for him.

We stopped at Sally Fuller’s house in Harvard, at mile 12.5, for delicious lemonade with mint from her garden and cranberry loaf. We enjoyed her bluebirds and other woodland creatures, but we forgot to take a picture. We will have to work on taking more pictures. Meanwhile, imagine a picture of us, with Sally, in her backyard, right here in the blog.

………….
Sally had printed out the cue sheets for the first few days of our ride and had driven part or the route. The printed cue sheets are very helpful – Dana can almost read them without glasses. Plus, comparing the different directions between the ACA maps and the google cue sheet helps fill in some gaps. We had not printed them ourselves because there would be way too much paper, but we realized that we could use printers at hotels to print them up as we go.

Speaking of too much paper… it seems we brought too much of everything. Dana has been muttering about his wheels not being able to handle the weight. When we weighed our stuff this week, I was at 13.5 lb and he was at 20. I’m not sure what happened, but now we’re at 16.5 and 25. WTF?!?!

Meanwhile, Sally warned us about a big hill, so when we went up a hill a while later we thought “that wasn’t so bad”, but then we got to Sawyer’s Hill Rd and realized “Oh, THAT wasn’t THE hill. THIS is THE hill!” And I crossed the intersection, saw the hill, tried to drop into my granny, and my chain fell off. And Dana was still on the other side of the main road, because his chain had fallen off. I can recognize a bad omen when I see one – we walked up Sawyer’s Hill, which brought us to some amazing scenery, but was just proof of why I worry about roads with “Hill” in their names. 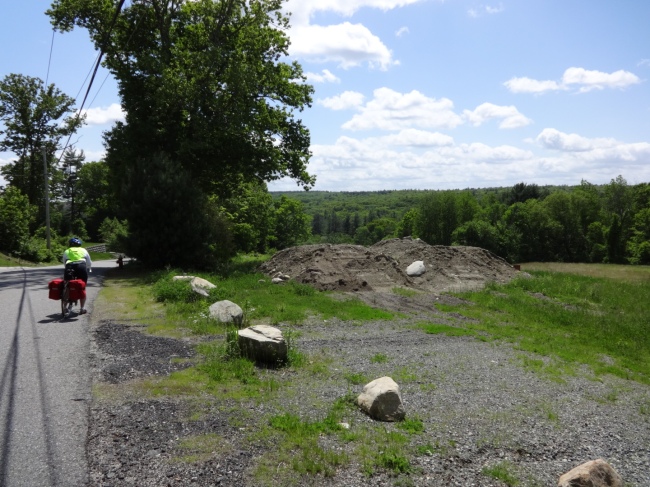 At mile 21 we stopped at a Dunkin Donuts/Pizza Primo/Sub Express. Had Italian subs and Gatorade. It was a wonderful meal, although I managed to spill oil on my biking shirt. I am SUCH A SLOB! Nice how Dana got a picture of the oil spot, huh? 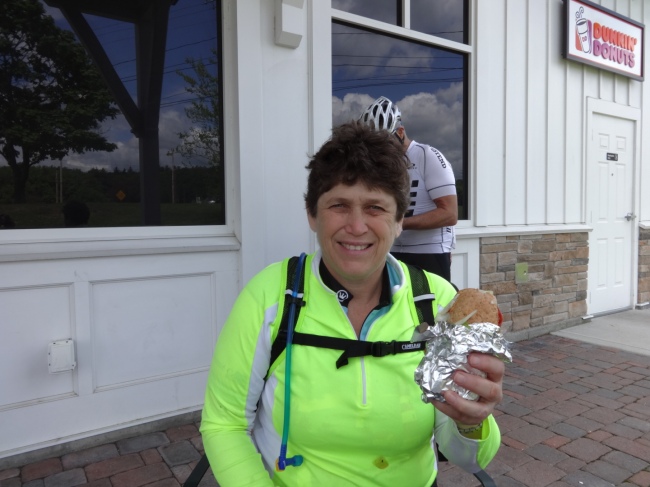 Speaking of the biking shirt, the whole day was surprisingly cool, but I’m sure we will miss this weather in a few weeks. We saw a sushi and burrito restaurant in Westboro, which for some reason I found fascinating, but we didn’t stop there. The rest of the ride was uneventful, although ridiculously hilly. Ruggles St. in Westboro really should be renamed Ruggles Hill St. We walked up some of it. Dana knows better than to call me a wimp if I walk hills. Walking beats falling over because the bike doesn’t work when you are going 0 MPH.

We both started to whine around mile 35 – my butt and Dana’s foot. 35 isn’t bad, and I think we will both toughen up fast.

Got to Whitinsville around 3:30, checked into the B&B, which is just beautiful. But they don’t serve breakfast, so it’s really just a B, but that’s OK. I tried emptying my Camelbak in the bathroom and poured water everywhere. Note to self – empty the Camelbak outside. In fact, I don’t even need it now, it isn’t that hot. Perhaps I will forgo the extra weight of the water, and take some of the load off Dana. Or maybe not, since he’s the one who really got us into this mess in the first place.

We are now sitting in a bar snacking and drinking responsibly. We met some people at the bar and they asked where we’re from, and the coversation went from there. But we had to remind them – don’t be impressed, we haven’t done it yet.

The cats are freaking out, they can always sense change. Cats hate change. So does Bill, but he isn’t here right now, so I’m trying not to worry about him.

Dana is still freaking out about work, worrying if everything will be OK, wondering how often he will have to check in. I am freaking out about the house, which he thinks is silly. May I remind him that, for the last 20 years, this house has been my work? And now I am just walking away from it.

Whenever my grandmother left her house – that would be her apartment on Rockaway Ave. over Reiss’s plumbing supply store, for any Levitsky cousins reading this – she stood on the threshold and said “Goodbye house”. My mother used to laugh at this, until she got old enough to understand Grandma. And then for the last few years of my mother’s life, whenever she came to visit us, she would stand on her threshold and say “Goodbye house”. The day she left her house for the last time, to move into assisted living, she said “Goodbye house”, and I broke down in tears.

I took a moment to look at our plan for the ride and thought I’d share this so everyone would understand our expectations.

To get back in time to start work on 8/4, we have to start driving home from Florida (in a rental van) no later than Saturday morning 8/2. (Of course, we’d like to leave earlier to visit places on the way back, but this is the limit in order to meet my goal for getting back to work).

This leaves 9 full weeks for biking or 63 days of riding. Yes, I know that we’re calling it our “57” ride, but we decided to give ourselves more time when we changed the ride from “Going to Florida” to “Going to Key West” – adding 500 miles.

The simple math is:

Only the first 600 miles are hilly after that it gets pretty flat. Note that Carolyn does not think that the words “Only” and “600 hilly miles” should ever appear in the same sentence.

I expect that on average we will do better than 40/60 miles per day. So conservatively, we can expect to have 15-18 days for tourism, either on the bikes or in the van on the way back.