Note: I wanted to title this post “The Battle of Fredricksburg”, but Dana thought that would have been a better title for yesterday.

Sitting down to lunch at The Soup and Taco in downtown Fredricksburg. This is a great town. Lots of history, and the main streets have an original, old-fashioned feel. There is even a drug store with a lunch counter, and it looks like it’s been there forever, not like someone designed a new one to look that way.

This has been the best biking day yet. Really nice roads – not too busy, not too hilly, not too confusing. Right before Fredricksburg we found the Chatham House, which is an old plantation house that became a Union army hospital and then fell into ruin and then was reborn and eventually became part of the National Park system.

We took the house tour, and the garden tour, and watch the 15 minute video. Here I am wondering why Dana doesn’t see my need to hire a professional landscaper when we get home.

Immediately after leaving Chatham House we crossed the Rappahannock river into downtown Fredricksburg.

The first thing we saw was a bike shop. Dana’s derailleur has been acting up again, so we went in and they tweaked it for him. I bought a front pack, as I have been admiring his for 750 miles now. I am very excited about installing it on my bike later.

In the bike shop we met Mimi, who recommended The Soup and Taco for lunch, so here we are. After lunch we will walk back up Caroline Street to Tea Tyme and What Nots for dessert. It’s our anniveresary, we might as well treat ourselves well.

In a Quality Inn in Spotsylvania. Two items of note here:

We have perfected the science of unpacking our panniers, storing our bikes, and arranging our biking clothes for tomorrow. After 22 straight nights in hotel rooms, the stuff almost organizes itself.

When we left Fredricksburg, we passed another Civil War battleground, and saw the famous stone wall that gave Stonewall Jackson his name. They had this diorama in the gift shop. And here everyone thought my blog post about dioramas had nothing to do with this bike trip. Hah! 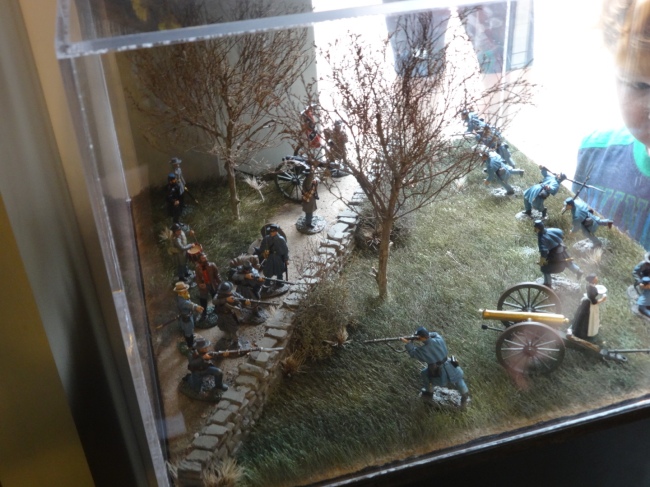 Then we passed another battleground, where all of the Confederate troops had their trenches. Then we rode for a while on nice roads, not too busy, not too hilly, through farmland.

Note: I promised Dana that I would add this… Every time we go up a hill, I mutter about how there shouldn’t be anymore hills. OK, I’m being a bitch, but then again, he wants me to go faster, and I cannot go faster on these hills. On the other hand, I am now climbing most of the hills, which according my own rules means they are not really hills. But call them what you will, they still slow me down to about 5 MPH.

Toward the end of our day, we found the Stonewall Jackson shrine, at the Fairfield Planation, site of the Battle of Chancelorville, at Guinea Station, where Jackson was killed. There is a commemorative stone there, although he is buried in Lexington, VA. The original plantation office building is still standing.

I would have liked to go another 13 miles today, but Dana wanted to stop because it was already 5:30 when were at the shrine. Today’s lack of mileage is more due to our stopping so much – 2 plantations and 2 restaurants in Fredricksurg – but I wish we could do more. It’s about 60 miles to Richmond, and since there isn’t much to see between here and there, hopefully we will make it.

And, although I am not ready to forgive Dana the hills yet, it is finally getting flatter. Not exactly flat, but flatter.

We just finished our romantic anniversary dinner – Italian food delivered to our motel room, with Dr. Pepper from the soda machine in the office. We don’t put too much stock in the whole anniversary thing, so this is just fine. The less it takes to make you happier, the happier you can be, right?

Dana just did some map math, and he figured out that if we average 50 miles per day, we will be Key West in 33 days. Since I was going to claim success if we made it to St. Augustine in 57 days, I think Key West in 55 is a victory. Then again, we’re not there yet.

And we installed my new front pack! OK, I tried to install it, but I got the screws confused so Dana did it while I bought soda from the machine in the office. So sad, but I’m still excited about the pack.

5 thoughts on “Day 22: Stafford, VA to Spotsylvania, VA via Fredricksburg”