In a motel in Stafford, VA. We really wanted to make it to Fredricksurg today, but it’s another 23 miles from here, and we are beat. The hills are definitely getting smaller, but they are not gone yet. Dana has finally admitted that perhaps he was mistaken when he said there would be no hills after 600 miles. (Actually, he was just plain wrong, but he hates being wrong, so let’s just say he was mistaken, shall we?)

We began our day riding through Fort Belvoir. Other than having to show ID, the guards were very nice to us. And the grounds were beautiful – sort of a new, cleaned up version of Devens. Our problems began when we left Fort Belvoir, and had to ride on route 1.

We knew route 1 wouldn’t be good, but there was a sidewalk for much of it, and after only 3 or 4 miles of hell, we got onto some side roads and ended up back in Occoquan, where we had dinner last night. We had fruit smoothies there today, then headed back to hell.

My problem with the ACA routes up until now was that they go so far away from civilization, it’s all hills and no services. Today’s ride made up for the last 700 miles of that problem. Miles and miles of almost highway, with no shoulders or sand-covered shoulders. At one point Dana called me a wimp for not wanting to ride in 50 MPH traffic on the sand-covered white line. We began speaking again about 10 miles later.

Our big worry for today was getting through Quantico. As we were approaching Quantico, on yet another big, loud, shoulder-free highway, my biking group from home called. They were having their end-of-season ride and lunch. Here I am talking to them on the side of the road 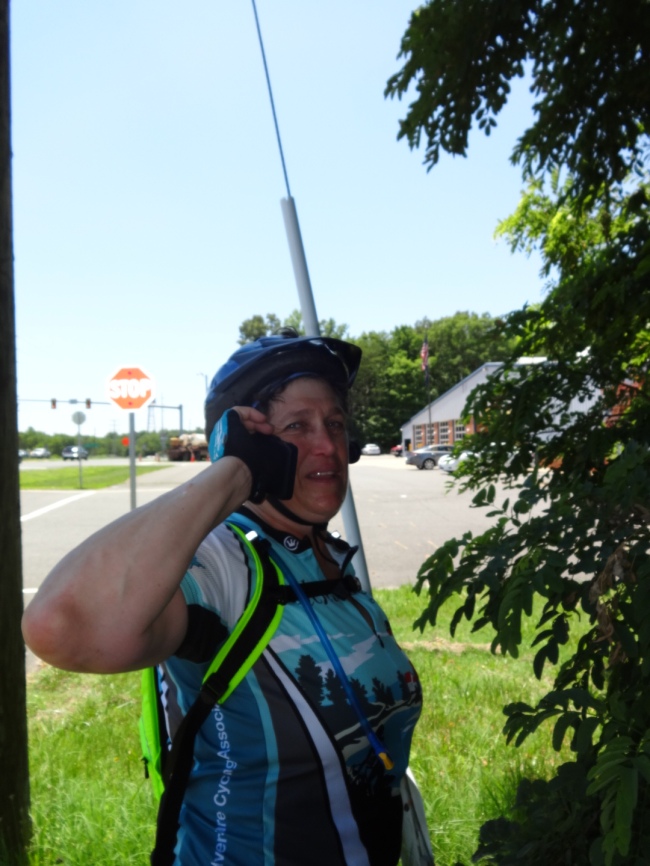 Here is a picture of their lunch. They offered to save me a lobster, but I’m thinking that’s a bad idea.

in this roadside clam shack

Then we braved our way into Quantico. Joplin Rd goes right around the military grounds, and would have been a fine biking road, except that a number of cars were afraid to pass us. So by the time they did, there were a bunch of angry cars behind them. We got sworn at 3 times, got the finger 5 times, and one car actually tried to swerve in front of me. And we put up with that for 9 miles, which I know because Dana and I had a bet about how long the road was. (I won, in case you care, which I’m sure you don’t.)

We then entered the Quantico Military Cemetery, which the guy at George Washington’s distillery told us is beautiful, and he was right. Here is Dana checking maps outside the bathrooms, which were very nice, too.

Our route out of Quantico took us back to route 1, which was packed with angry rush hour traffic. But right there in the middle of it all were the remains of the first Catholic church in Virginia.

Just crossing the road took some maneuvering, and then I insisted on walking most of our 1 mile, because again, I was a terrified wimp. We were looking forward to getting off route 1 onto Garrisonville Rd, but that was even worse – angry route 1 traffic meeting up with angry I-95 traffic on a plethora of on- and off- ramps.

So by the end of what Dana is now referring to as “highway to hell” day, we didn’t have another 23 miles to Fredricksburg left in us. But tomorrow we will take our butt and lunch break there. It’s our 23rd anniversary, and this will be our first anniversary spent in VA, or anywhere exciting for that matter. We will then continue on towards Richmond, and we should be in Richmond sometime Sunday.

If the hills shrink, and we can avoid the highways, we should get up towards 60 miles per day soon. Let’s see what happens.