Today started off on a very good note, as I finally beat level 273 of Candy Crush.  Immediately following this major accomplishment, we were leaving our hotel room, and I had a brainstorm. For a split second, Dana was in the hallway wth his bike, and I was still in the hotel room with all of my stuff, and I thought “I can just lock him out now, hide in here for a while, and escape back to Westford.”

But I was feeling reasonably confident because it was looking to be a relatively flat 30 mile day. So I abandoned my escape plans, hauled my bike into the hallway, and we started our day – off our route, staying on the PA side of the river. Our plan was to cross to NJ, back onto the official ACA route, in Milford.

If you ever get a chance to go to Milford, PA, do it. It is so quaint, so wholesome looking, just wonderful. We stopped into a deli that used to be a RexAll Drug – it still had the RexAll blue and orange designs on the bricks. The deli is owned by an ex-Brooklynite, so all of the sandwiches had a NY flair to them. We ordered sandwiches for lunch later, then sat at a table on the sidewalk drinking juice.

Then we crossed back across the Delaware, on a walking bridge, which was very pleasant. On the other side of the bridge, we found ourselves in Montague Twp, NJ. 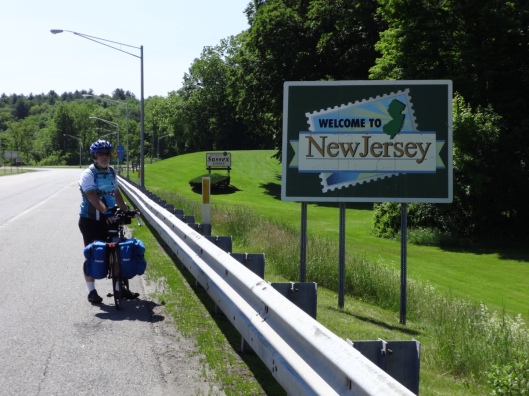 Our route promised to follow the Delaware Water Gap for about 30 miles. It followed the river for a while, then rolled through a national park near the river. It was a beautiful ride – almost no cars, lots of wildlife, gently rolling terrain. But it was the weirdest thing – the road was covered with centipedes walking all over the place. We tried not to hit any, since they live there and we respect nature. But I just have to say that if I EVER see half as many centipedes in any room of my house, I will move immediately.

We took a butt and lunch break at the Walpack Inn, which is just outside the town of Walpack. From what we could see, Walpack consists of a post office and 5 houses. Of course, the entire area consists of mostly abandoned farm houses, so it was nice to see a living town. However, it did not have any stores that we could see. In fact, after leaving Milford, we saw zero stores on our entire ride. Which explains the sandwiches we bought earlier in the day.

[Note: We later learned why there are so many abandoned houses in this area. In the late 1960’s, the entire area was condemned as preparation for the proposed Tocks Island Dam project. Havoc was wreaked on many towns in the area, homes and businesses and lifestyles were destroyed. On the plus side, the area is now a National Park. Small compensation if you ask me.]

So when we got to the Walpack Inn, we wanted to fill our water bottles, but it doesn’t open until 5, so we just sat on a bench eating our sandwiches and sucking water from our Camelbaks. There was a little LBJ flitting around, and we threw some crumbs for it.

FYI – LBJ is a very official bird watching term meaning Little Brown Job. My friends and I learned this from Bob, on a Birding with Bob tour, on one of the Boston Harbor Islands.

The road continued in its rolling, rambling way for a while, then we crossed a little stream and started UP the road to Mill Brook Village. And I do mean up. 2 miles of steep, rutted, nasty, hot road. When we finally clawed our way into Mill Brook Village, we figured we’d see a store in which to get water or Gatorade or something. But I don’t think Mill Brook Village is even a real village. I think it’s sort of a museum village, and it wasn’t up and running today, so alas, no water, no Gatorade, no nothing.

A note about that nasty hill… When we plotted the ride in the “Ride with GPS” website, it showed every day with a ride profile, which roughly shows hills, flats, downhills, etc. The profile for today’s ride looked great, except for this one big spike in the middle. We had been wondering what could possibly cause such a sharp, steep spike in the profile – like a middle finger sticking up where you don’t expect it.  And now we know – Mill Brook Village was giving us the finger.

Our nice 30 mile day turned into a long, hilly 40 mile day, at the end of which we crossed back over the Delaware. On the sidewalk of the I-80 bridge we met Debra and Camilla, who are riding from Key West to Bar Harbor. You can check out their blog – two2tandem.blogs.wm.edu They gave us some good tips for our coming adventures, like that there’s a bridge out near Valley Forge. Good to know.

Tonight we are staying at the Deer’s Head Inn in Delaware Water Gap, PA, which is an old hotel, restaurant, bar, and jazz room right on the Appalachian Trail. It’s awesome. Tomorrow we are riding to Phillipsburg, PA – hopefully only 25 or 30 miles – where we will visit Dana’s friend, Doug, who he’s known since 7th grade.

A few things I figured out today: