Standing on line at Britt’s Donuts on Carolina Beach. The line is about an hour long. Dana thinks it’s stupid to stand on line for an hour for a donut, but we’ve had so many people tell us about this place, I figure we have to try it. Besides, we’ve also been told that there isn’t much to see or do in Shalotte, so we might as well waste our time here.

Yesterday afternoon we finally asked if we could pet Claude. 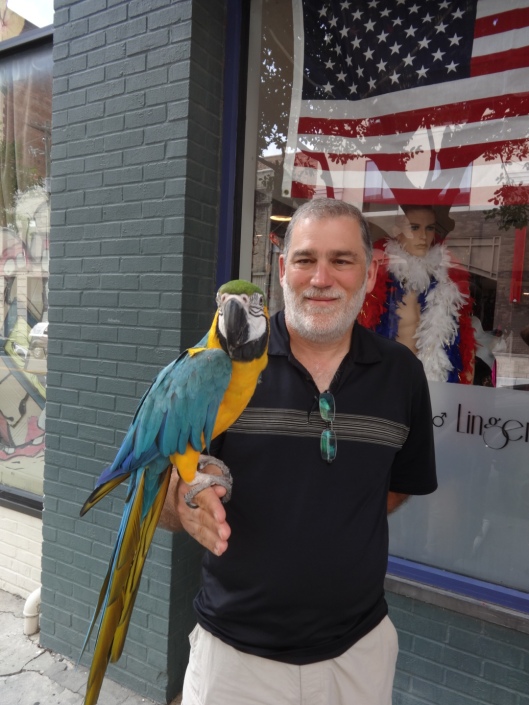 Then we sat in a bar, eating dinner and watching the World Cup, after which  we sat along the river and listened to a military band for a few hours. They were very good – military music, rock, reggae, country – everything 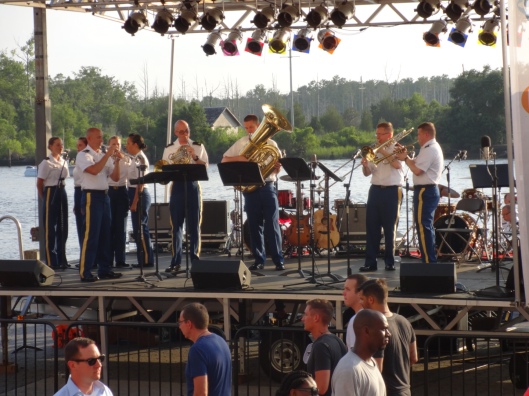 Then we watched the fireworks. This morning we were back to our routine, packing the panniers and getting out early. After breakfast at Nicky’s on Front St., we rode south out of Wilmington. The roads were empty, probably thanks to too much partying last night.

On the way, on River Rd., we met Brent and Jen. They rode with us for a while, asking about touring. They are planning a West Coast ride this fall, so we shared the few tidbits of knowledge we’ve gleaned in the last month. We took extra time to show them our headsets – as annoying as they can be, they are really a must for safety. 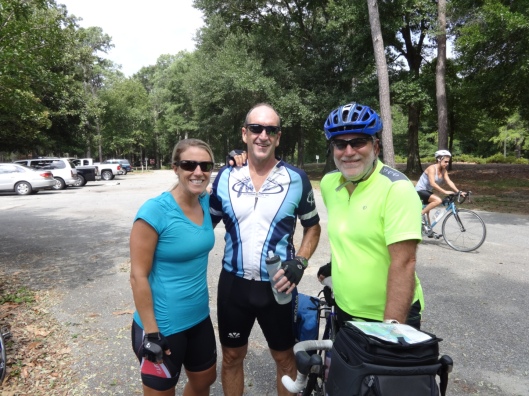 We just snuck onto the ferry from Fort Fisher to Southport. It was full for cars, and the parking area was crazy, but we just sailed on at the very end. Here we are at the end of the car line. 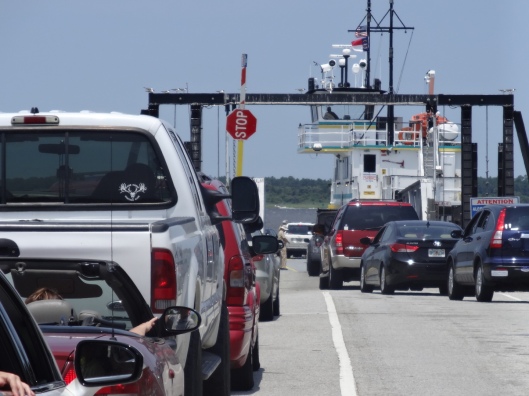 When we got to Britt’s and saw the line, Dana sat down with the bikes and I got on line, but we left our helmets on. And as soon as I spoke to him, everyone around me turned around, because really, no one wants to stand on line for an hour with a crazy person. So I explained about the headsets, and then we had a lovely time for rest of the wait. It seems this is a popular photo spot:

Time to make the donuts: [Note: I’ve been kicking myself for not using that line for the Duck Donuts pictures. So even though I couldn’t get a good shot of donut making at Britt’s, I’m including it anyway, just so I could use that line.]

FYI… Britt’s donuts really are delicious. They make them fresh while you wait, and you get them in a bag, piping hot. We got a half dozen and polished them off right there – word has it you have to eat them right away, and who are we to argue with tradition? And in case you thought we were off the Civil War Trail, you were mistaken:

The ferry ride was short, but very pleasant.

We got off the ferry in Southport. What a pretty (if somewhat touristy) town! I would have loved to do some touristy stuff there, but we still had 30 miles to go, so we didn’t stop. I picked up a self-guided tour brochure, I will tour vicariously through that. Here are the historic markers we found in Southport: 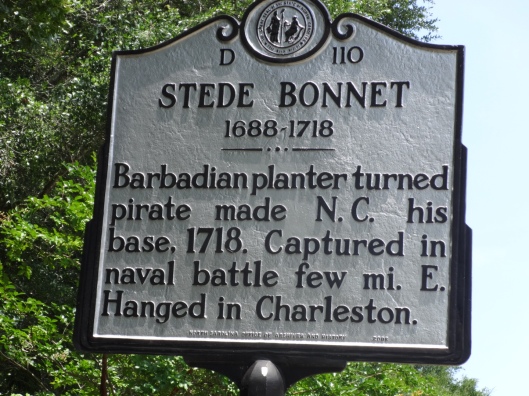 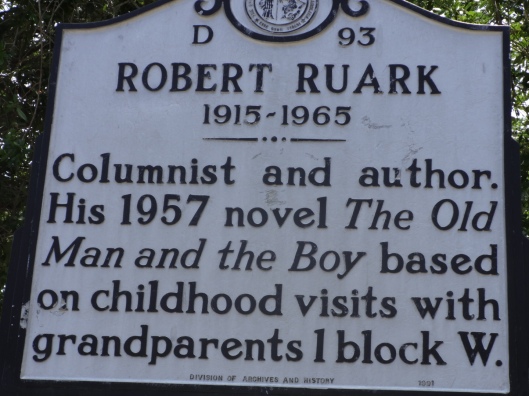 While the ride to the ferry was scenic and beautiful, the ride from Southport to Shallotte was incredibly boring. Twenty miles of nothing on rte. 211. We stopped at a Dollar General for Gatorade, a butt break, and to alleviate some of the boredom. While Dana was in the store, I perused the sale bins in the parking lot. I mean, how much more on sale can it be when it started in Dollar General? You will be happy to know that I did not buy green pens, brown markers, boy’s underwear, self-help books, toilet brushes, or a football-shaped water bottle.

Things improved when we got off rte. 211. It started looking more like Pennsylvania farm country, but without the hills. We saw horses and goats and donkeys – just enough to keep us un-bored. We stopped at a farm stand and ate canteloupe and boiled peanuts. I liked the peanuts, Dana is not a fan.

When we got to Shallotte, we were very confused about rte. 130 .vs. rte. 17 .vs. business rte. 17. But amidst the confusion, we found an Office Depot and bought a new keyboard. Then we went back to being confused, rode around the shopping mall twice, and then rode 2 miles down business rte. 17.

Unfortunately, our motel is on regular rte. 17. So we stopped and checked Google maps. The hotel is 1 mile from here, but there is nowhere to eat there. So we stopped right here at the Wing & Fish Company. After a nutritious chicken wing dinner, we will go find our motel. And in case you are wondering where exactly we are, here’s a lot of what you need to know. 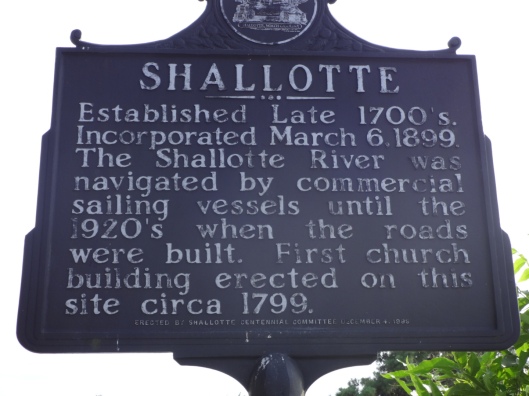