I would say that this is the day from hell, but according to the ACA maps, that will be Tuesday. But today has been pretty nasty, so we’ve dubbed it the day from hill.  Some of the roads we rode were named Buck Hill, Brandy Hill, Thompson Hill, and Buckley Hill. Get the picture?

We started in Whitinsville, figured we would just ride until we found food. Saw a convenience store at mile 6, Dana said “No, I want to find a place that serves omelets.” Famous last words. The next food we found was at Beno’s Variety in Grosvenordale, CT, at mile 27.

But I’ll get back to that later. So the day was beautiful, but as it progressed it got hillier and hillier, and we got hungrier and hungrier. We walked a few hills, but it was worth it for the views. Before we left home, Sue gave us a box of gummy peaches, and she was worried the extra weight would be a problem. It’s no longer a problem, as we ate a lot of gummy peaches walking up those hills!

We got into Rhode Island: 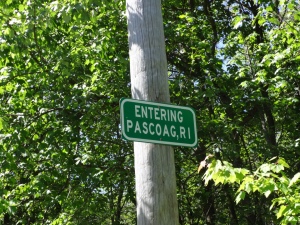 then Connecticut. Missed a few turns, which is particularly sucky when going downhill, but in general I give Dana an A for his navigation skills. If he had younger eyes he would probably get an A+. 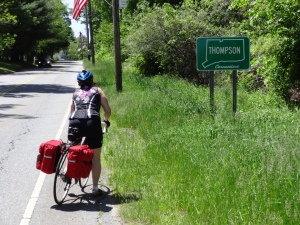 When we got to Thompson, CT, we were sure we would find food, but we didn’t. So we sat under a beautiful old tree in the town center and ate walnuts from our emergency food stash. Then, when we saw Beno’s Variety about 6 miles later, we went for it. Water (a must!), Snickers bars, and Cherry Garcia ice cream.

While we shared the ice cream with one spoon, Dana looked up restaurants in the area, and found Four Corners Restaurant and Pub, 1/2 mile up the road in Quinebaug. So we went there and shared a sandwich and talked to some really nice people. And we bought a sub to carry for dinner, since the hotel is near nothing. A lady at Four Corners warned us about the hills on our remaining 15 miles, and boy was she right! Turns out CT route 197 goes through Bigelow Hollow State Park, but why it was uphill getting there and uphill getting out is beyond me.  We walked a lot of the roads in there. I am no longer feeling bad about walking.  Walking is exercise.  Deal with it.

A problem I’ve been having is that Dana keeps saying that this is a meandering ride. I don’t think that word means what he thinks it means. Walking up all of those freaking hills does not count as meandering in my book. I think he pictured us easily doing 50 miles per day, like the big boy bike tourists who post on big boy bike tourist sites. So I told him that he has to stop using the word meandering, as I find it somewhat insulting.

Then, a few miles and a few hills later – some on foot, some on bike – he started getting tired, and began wondering if we can actually do this. All this time he’s been saying how easy this is going to be, and I’ve been terrified. So there I am saying “OK, this is bad but we can do it” and he said no, we might not make it to FL. I think if we can both think about this the same way, somewhere between “pessimistic hill slug” and “uber macho biker dude”, we will get along better for the next 2 months.

By the time we finished our ride today, we were mentally and physically exhausted.  I almost cried when I saw what turned out to be the last hill. If there had been another hill, I think we both might have cried. Now that we are in a motel room and showered, things are looking up. But our backs are killing us.

6 thoughts on “Day 2: Meandering from Whitingsville, MA to Union, CT”